A DIFFICULT START WITH A SILVER LINING

Once upon a time, there was a boy called Andrew Kerr. Although he was born into a ‘posh’ family, his silver spoon had a cutting edge. Youngest in the family, he was an unwelcome late mistake. Throughout his life, they all called him the Ape.

As he grew up, home and school constantly told him how stupid he was. In middle age, he discovered he was dyslexic – which was not understood in his childhood, and often mistaken for stupidity. He said this realisation was “a blessed moment of liberation after all the voices saying stupid, useless, failure.”

After leaving school, he tried various jobs. However, a combination of low confidence and high integrity ensured he would never succeed in the commercial world. Then one day he became personal assistant to Randolf Churchill – son of the famous Winston.

Randolph wasn’t just difficult. According to Kate Fleming, biographer of The Churchills, he was “loud, brash, rude, impossible, boorish, quarrelsome” – the list goes on, but you get the picture. Working with him was the making of Andrew in what he calls “one of the most extraordinary decades of my life.” If there were a doctorate in people skills, he would surely have earned it.

This was during the sixties, so as Winston Churchill remarked, Andrew was “becoming intolerably hip”. At one high-level luncheon, Andrew found himself seated next to Princess Margaret. He began telling her about his book Heaven is a Planet, on how supernatural events in the Bible came from extra-terrestrials.

At the sound of this, the table froze. Noticing the shocked silence, he tried to change the subject – but the Princess insisted he continue. A week later, he heard that she’d shared these ideas with the Archbishop of York.

WHEN THE FUSE WAS LIT

In 1970 he lit the fuse that was destined later to explode into the Glastonbury Festival.

Returning with a carload of friends from a festival on the Isle of Wight, he announced, “We’ve got to have a proper festival. One that has some cosmic significance. Let’s do it at Stonehenge at the Summer Solstice!”

Stonehenge turned out to be a non-starter. But the grapevine was chattering about a farmer near Glastonbury – Michael Eavis – who’d held a festival in his fields. When Andrew went there, he saw that “the site was a perfect amphitheatre, with Glastonbury Tor seven miles away, commanding the valley.”

He explained to Michael that he wanted to put on a festival for “spiritual awakening and a demonstration against greed. We don’t have much money, but we’ll pay what we can. And Eavis said ‘yes’. It was the most blessed thing in my life. The chance to live out a crazy dream.”

In October 1970, Andrew moved into Worthy Farmhouse. As he drove in, he saw a rainbow arching over the farm. He took this as a positive omen.

Once he’d settled into the farm, he got to work setting up the first Glastonbury Festival. He gathered a team of helpers and an impressive line-up of performers who were happy to play for free. These included David Bowie, Arthur Brown, Traffic, Hawkwind, Fairport Convention, and Jimi Hendrix in spirit. He’d promised to be there, but his tragically early death happened instead.

of Andrew’s staunchest long-term allies. “She was a major force in the preparation for the festival,” he said. “Without her support and dedication it could not have happened.”

The first hurdle that faced them was local opposition.“It was important to keep the people of Pilton happy with what we were doing,” he said. “It was the home of lot of retired military men and their families.”

Arabella accordingly set to work opening local fetes. At the Shepton Mallet Debating Society, she made a good case for having a festival, and won a resounding victory. Andrew appeased the District Council’s public health concerns with diagrams of the toilet plans. He also went to Pilton Parish Council meetings, and wrote for their magazine.

He said opposition came more from newcomers to the area – the ‘real locals’ were generally agreeable. The vicar visited the farm and benignly compared them to the Benedictine monks. Andrew dowsed the church with his hazel wand, showing the vicar how a ley line led straight to the altar.

He’d discovered a talent for dowsing years ago, and also knew John Michell, author of The New View Over Atlantis. It was a natural part of the preparations to dowse Worthy Farm to find the most powerful place to put the stage.

In accordance with sacred geometry, he and John Michell decided that this stage should be in the form of a pyramid, “to draw beneficial astrological influence and stimulate the Earth’s nervous system with joy, appreciation and happiness.” The famous pyramid stage of today’s Festival is still on the spot which they first picked.

When the party was over, Andrew and his team spent a month clearing up the litter. He also had to appease some annoyed locals. The Festival’s solicitor advised them to immediately pay all the doctors and people claiming damage. Writing to Michael Eavis about this, Andrew said “I am sorry there isn’t more in the kitty for you to start a new herd, but I hope £100 will get you a new cow!”

A DESTINY THAT COULDN’T BE AVOIDED

Then, regarding the Festival as a job done and dusted, Andrew went off to Scotland to live on the land in a simple, self-sustainable way as a crofter. At that time he had no idea how much bigger Glastonbury Festival was destined to become – both in his life and in the world.

After a strong beginning in 1970, Glastonbury Festival slept for six years while Andrew  was in Scotland. Then one day his partner dropped a bombshell – she was leaving him for another man. Heartbroken, Andrew returned to England. When he dropped by to visit Michael and Jean Eavis, they offered him a flat on Worthy Farm. He gladly accepted.

In 1978, soon after he’d moved back to the farm, Andrew noticed that a group of tipis 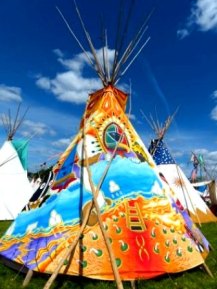 had suddenly appeared. Just then, Michael Eavis drove past on his tractor, announcing with a grin, “We’ve got a festival on our hands!”

It happened like this. Driving from Glastonbury a few days earlier, Michael came upon a police escort to a convoy of hippies who’d been trying to set up a festival in Cinnamon Lane. Locals had protested, and the party had to move on.

“Where are you going with this lot?” Michael asked the police. “Down to your farm, Mike,” was the reply. Michael protested that he had no facilities for them. At that, the police suddenly noticed that his car was still untaxed. With a sigh, Michael agreed to let them bring the convoy to Worthy Farm.

That fateful day was when Glastonbury Festival found its forever home. From then on, it steadily grew into the huge national event that we know today.

Andrew quickly gathered a team of helpers, who re-built the pyramid stage on the same powerful spot that he’d originally dowsed for it. This time they built it to last. Michael said it wouldn’t need planning permission, because for the rest of the year it would be a cow shelter and hay store.  Although “the comical filling it with hay bales to prove the point wore a little thin with the authorities,” they eventually granted its licence.

Andrew moved into a caravan on the farm, running the Festival from there for the next eight years. “I became known as the site manager, but the post was more of a site foreman – overseeing fencing, gateways, water butts, lavatories, emergencies and litter-picking.”

It was no longer feasible to do it all for free, so they decided to donate any profits to the Campaign for Nuclear Disarmament. This had the added bonus of attracting a large pool of helpful CND volunteers.

Arabella Churchill generously propped up the festival finances whenever necessary. 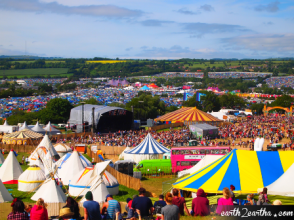 She also did much to create its special character, “taking on the theatre department and developing it to include circus, cabaret and street theatre acts right up until her premature death in 2007.” Children’s World, the charity she set up at the time, is still going strong.

Andrew managed Glastonbury Festival until the mid-1980s. He spent his last years in Pilton, visiting the festival site a few days before he died aged 80, October 2014.

Andrew Kerr and Arabella Churchill were like the fairy godparents of Glastonbury Festival.

Nearly half a century later, the magic they brought to its earliest beginnings has grown and flourished in ways they probably never dreamed possible.

For more articles about the New Avalonians, click on this link

Have a look at my website to contact me, and to find out about my books, Past Life Regression,  Readings and Soul Path Counselling